A giant of American comedy.  A performer of the impossible.  A filmmaker of grace and beauty. A genius in slapshoes and a flat hat. Impossible. The word that best defines the work of actor and filmmaker Buster Keaton might be: impossible. His falls from above, without a net, without a special effect, and without a stuntman (“stuntmen aren’t funny”) appear nothing less than impossible. His ability to hold that straight face, through car crashes and cyclones, through love and heartbreak, and yet to be so expressive (go ahead, try it yourself) seems impossible. And his towering achievement, producing 19 silent short film and 10 silent features (6 of which are now in the National Film Registry) over the course of only 8 years would be called impossible were it not for the fortunate truth that the films exist, and that we still can, should, and do watch them. As often as possible. 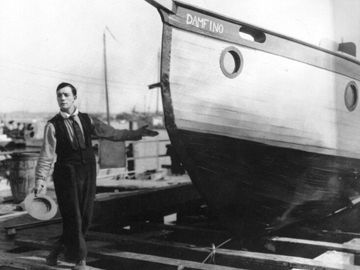 THE STORY OF BUSTER

Read about the life and art of the Great Stone Face

Learn about our members-only newsletter

The Damfinos have been such a wonderful part of my life and I have found lifelong friends from my membership. If you aren’t a member yet I urge you to come on in and be a part of our Damfamily.