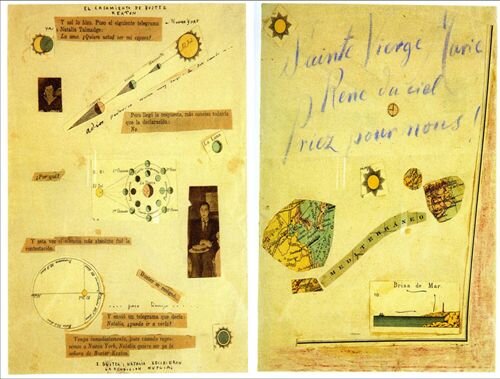 The work of Buster Keaton has often been linked to the Surrealist movement. Though Keaton’s films stood very much on their own and he didn’t like the intellectualism that went along with art movements like the Surrealists or even the word “artist”, there are parallels. There is no denying that surrealism as a concept is present in Keaton’s films, and they are contemporaries: There must have been something in the air in the 1920’s which was producing very weird things. Let’s just call it Zeitgeist. Founded in 1924, no other artistic movement that preceded it had ever been as influenced by cinema, and popular cinema at that, then the Surrealist movement.  And Keaton certainly did influence some of its greats: A young painter by the name of Salvador Dalí was studying art when Keaton released his series of short comedies in the early 20’s. Years before he joined the Surrealist movement Dalí was already heavily influenced by cinema and would be all throughout his career.

In his essay “Film-arte, Film-antiartístico” Dalí declared the works of Keaton to be prime examples of “anti-artistic” filmmaking, calling them “pure poetry”. One of the things that attracted Dalí and his later collaborator Louis Buñuel to the works of Keaton is their fascination with mass-produced inanimate objects. Dalí named those “Objects of authentic and very pure poetry” Keaton’s lack of expression appealed to them in that same sense, and Dalí named Keaton’s expression ” As modest as a bottle’s”. (the full description, translated from Spanish, says something like: “Buster Keaton’s expression is as modest as that of a bottle, for example: though his aseptic soul pirouettes through the round and clear track of his pupils. But Buster’s bottle and face have infinite view”)  Furthermore there was the use and re-purposing of such objects and Keaton’s practice of dehumanizing human characters and making inanimate objects into a character in his films that also appealed to them. Another contribution of Keaton to Surrealism may have been to show how the real and the unreal could co-exist on film in a believable form.

In 1925 Dalí made a work devoted to Keaton, titled “El casamiento de Buster Keaton” (the marriage of Buster Keaton.). The work is a collage about Keaton’s marriage to Natalie Talmadge. The piece features an image of Buster in a seated pose, staring straight ahead with his trademark porkpie hat resting in his lap and another of a still from the Navigator. The collage also has a Spanish text cut from newspapers. A Keaton fan blog has translated the text as:

And so he sent a telegram to Natalie Talmadge “ I love you. Will you be my wife?”

But the answer came as concise as the declaration. “No”

And this time, the most absolute silence was the reply.

and he sends a telegram saying, “Natalie, Can I come and see her?”

“Come immediately, because when we return to New York, Natalie wants to be Mrs. Buster Keaton.”

Buster and Natalie receive the blessing to be married.

The collage was made in 1925 and sent as a postcard to his friend and fellow Keaton enthusiast, the poet Frederico Garcia Lorca, of whom we will talk about more later. It was supposedly accompanied by a note in which Dalí expressed his enthusiasm for Keaton’s new film, the Navigator. (source needed)

●      “El casamiento de Buster Keaton” might be the most direct reference to Keaton in Dalí’s work, but he was inspired by Keaton and his contemporaries in his work on several occasions. For instance, the 1927 painting “Apparatus and Hand” was inspired by “The Electric House” and the way Keaton approached modern technology.

●      Later on, Dalí himself embarked on making a film and collaborated with Louis Buñuel to make “Un Chien Andalou” and “L’age D’or”. Buñuel was a fellow silent comedy fan, with their favorites being Keaton and Harry Langdon. The script of “Un Chien Andalou” has no understandable narrative whatsoever. It was meant to be illogical. However what made it stand out as an avant-garde film and make Dalí and Buñuel an integral part of the Surrealist movement from then on was that they – while narrating the absurd – let themselves get inspired by ideas presented to them in popular cinema, most noteworthy in comedy. They use traditional character roles within bizarre scenarios. Within the scenarios presented there is comedy. They also use sight gags to get their message – whatever it may be – across. The dream-like look on the actors’ faces also reminds you of Keaton.  “Un Chien Andalou” in itself would become known as one of the most influential films of all time.