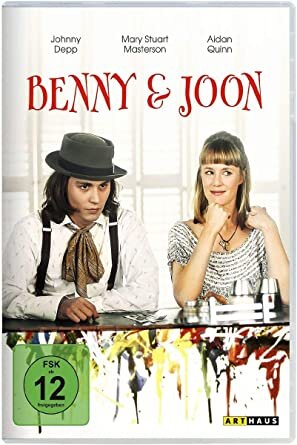 In 1993 the romantic comedy “Benny & Joon” was released. In it Johnny Depp plays a character named “Sam” who is obsessed with Buster Keaton. He wears a porkpie hat and dresses like Johnny Grey joined a Grunge band.

Aidan Quinn and Mary Stuart Masterson play Benny and Joon Pearl, a brother and sister who got orphaned as teenagers and have been living together ever since. Joon has psychiatric problems driving Benny to desperation as he doesn’t know what to do with her as she’s heavily influencing his work and private life. Things get so bad that he considers getting her institutionalized. Benny’s life revolves around his job as a car mechanic and his card game, in which a group of friends bet goods and chores instead of money. One night when Benny is preoccupied Joon joins the game and accidentally “wins” the cousin of one of the friends. This turns out to be Sam, a young man that recently came to town – by train of course – and spends all his time practicing physical comedy routines and watching old movies. He is obsessed with Charlie Chaplin, Harold Lloyd and especially Buster Keaton. As their housekeeper has recently walked out due to a fight with Joon during one of her episodes, Benny tries to make something good out of a bad situation and hires Sam. He turns out to be an excellent housekeeper and Benny feels relaxed enough to start dating local B-film actress turned waitress Ruthie (played by Julianne Moore). Meanwhile Sam and Joon fall in love. The four of them develop a strong friendship and Sam starts working at the local video-store though Benny encourages him to make a career out of his physical comedy. Things escalate when Benny finds out Joon and Sam have started a relationship, resulting in a huge fight and eventually in Joon being institutionalized.  Sam and Benny now have to work together to come up with a solution.

At first glance Benny and Joon is a typical 90’s romantic comedy, with Sam being a “Manic Pixie Dream… Boy” that walks into town to solve all troubles with his quirky personality. The ending seems too simple to be satisfying and sort of diminishes the earlier problems of the characters. However, as a silent comedy fan you can see more: Director Jeremiah Chechik spared little effort to put silent comedy references all throughout the film and there also seem to be subtle plot references to Keaton. Even the simple-solution-to-a-difficult-problem ending can be justified by looking at as a silent comedy plot, reminiscent of a more “traditional” Keaton film like “College”, where Buster and the girl solve the problems of her getting expelled because they got caught in her bedroom and her being harassed by his rival – things that where presented as major problems – by simply jumping out of the window and eloping.

Above all what makes this film worth watching is Johnny Depp’s performance. He spent a lot of time studying Keaton’s work before shooting began, (as can be seen here: https://www.youtube.com/watch?v=us0HEVb8svg)  and the result is quite remarkable. The name “Buster Keaton” is only mentioned once in the entire film, but his presence is everywhere. The list of references in this film is endless and here are the ones that stood out:

●      It starts with the opening credits, where we see a train traveling through wooded hills and over bridges, echoing the vast landscapes of “the General”. Sam is on the train and is first seen reading Robert Benayoun’s book “the Look of Buster Keaton”, peering over the book showing just the top of his porkpie’d head and perfectly mimicking the iconic image of Buster from “Go West” that graces the cover.

●      A moment where you see all the work Depp put into his role is when Sam does an elaborate pantomime routine which involves several moves and pratfalls directly influenced by Keaton. After finishing the act Benny asks “Did you have to go to school for that?” on which Sam replies: “No, no, I got thrown out of school for that.” – certainly a reference to Keaton going to school for just one day and getting thrown out for his clowning.

●      Some of the references seem more subtle and you only notice these when you are a fan of Keaton or silent comedy. For instance Depp’s manner of speech seems quite Keatonesque compared to other films. Yes, that’s a talkie reference. Listen to how he pronounces “Nooo” , or the “o” sound in general: It’s not quite the same but the influence is there. He meant the role to not be biographical, but still a salute or homage to Keaton and it’s in details like these that you notice this approach, as if Depp tried to portray Sam as being as close to Buster Keaton as possible without actually playing him.

●      In some scenes Sam seems to channel several silent comedians at once:

He owns a bamboo cane, like Chaplin’s, but instead of just wiggling and bending it in a Chaplinesque manner he nervously taps it on the floor – just like Buster in “The Saphead” – and then afterwards he bends the cane.

At the start of his physical comedy act he does hat tricks made famous by Charlie Chaplin and Harold Lloyd. He also does a perfect rendition of Chaplin’s bread roll dance from “The Gold Rush”. But did they choose this gag because they knew it originated in Roscoe Arbuckle’s “The Rough House” – Arbuckle’s bread roll routine being Chaplin’s walk – the first film that Keaton contributed material for and co-directed? Depp is a lifelong Chaplin and Keaton fan, but it is not unlikely that he and Chechik studied Arbuckle’s work as well, judging from the various scenes where he is inventively preparing food seemingly channeling Arbuckle and reminding you of shorts like “The Rough House” .

Sam also channels Lloyd in “Safety Last!” when he climbs the wall of a hospital and then swings down from the roof.

●      There are several visual appearances of Buster Keaton throughout the film: Sam has pictures of Buster in his suitcase, with the famous publicity shot from the Navigator where he hangs from the mast clearly visible. Also, when Sam is working in the video store, you see a large poster of Buster clearly visible behind him.

●      The film has similarities to “College” but there is also an actual gag from that film present in Benny and Joon: The video store is displaying a “help wanted” sign in the window. Sam sees the sign, takes it from the window and shows the sign to the owner indicating he wants the job.

●      A lot of Benny’s social life revolves around a card game. At one point he wins baseball tickets. Keaton loved card games -particularly bridge- and baseball.

●       Benny and Sam have important conversations in the bathroom – the place where Keaton claims a lot of good ideas came to him – This is also when Keaton’s name is said out loud: Benny wants Sam to perform his comedy act in a show and the only thing that convinces him is: “do you realize you could be the next Buster Keaton?”

●      The one reference in the film that the Damfino’s shouldn’t applaud is the fact that Sam doesn’t read and write very well. This film was released around the same time as Marion Meade’s book on Keaton and was quite a big cult hit. It’s likely that both contributed to the popularization of the myth that Buster Keaton was illiterate.