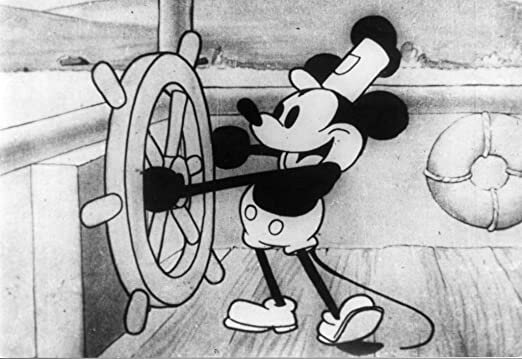 Mickey Mouse? Who? People who know nothing about animation film history whatsoever will still know the Walt Disney classics and it’s very likely they will have some fond childhood memories attached to them. And the oldest and most famous and iconic of the Walt Disney characters is Mickey Mouse. And the film he made his debut in has a Buster Keaton reference. A very obvious one.

The film that was to become known as the debut of Mickey Mouse and his girlfriend Minnie was released on the 18th of November 1928 and was actually the third Mickey Mouse cartoon to be produced. Walt Disney had already made the earlier, silent films “Plane Crazy” and “The Gallopin’ Goucho”, but these had failed to find a distributor. They were made independently by Disney, who was under contract at the time working on the series Oswald the Lucky Rabbit. When he saw Al Jolson’s “The Jazz Singer” in the cinema he got inspired on how to make the third cartoon starring his beloved Mickey Mouse: It was to be the first Disney cartoon to feature synchronized sound. This was a bold move for Disney and there was doubt among his employees as to whether or not a sound cartoon would be successful. They screened the unfinished cartoon for a test audience with live accompaniment similar to the soundtrack they where to record before doing so. After the screening turned out to be a success, they felt confident enough to record the sound.

As it is and was common for cartoons to draw inspiration from different sources in pop culture and especially cinema, the title and plot of the cartoon drew inspiration from a different source than the Jazz Singer: It was to take place on a boat. The song ‘Steamboat Bill’ was copyrighted by Ren Shields and the Leighton Brothers in 1911 and popularized that same year by singer Arthur Collins. It has since had numerous renditions.

Months before the cartoon went into production Buster Keaton referenced this song in his picture “Steamboat Bill Jr.”. Disney was to draw inspiration from both the song and the Keaton picture, as he sang – as Mickey Mouse – the song in the opening scene of the cartoon and basically used the same title for the cartoon as Keaton had done for his picture because well: Steamboat Bill Jr. is a reference to the name of its leading character, William Canfield Junior, played by Buster Keaton. Steamboat Bill is the nickname of Canfield Sr. Apart from one snide remark made by Bill Sr.’s rival, nobody calls William Jr. “Steamboat Bill Jr” in the picture. They call him Willie.  The cartoon went into production two months after Keaton’s film was released and aptly parodies the name: “Steamboat Willie”.

●      The name here refers to Mickey Mouse’s character and the role he fulfills is possibly a Keaton reference – though also not an uncommon cartoon plot: At the beginning of the film the diminutive Mickey Mouse seems to be the captain of the boat, whistling and dancing at the steering wheel. Then the real captain (played by the villainous “Pete”) comes in, towering over Mickey and harshly pulling him away from the wheel, judging his jolly behavior and putting him in his place. It echoes the roles of Buster Keaton and Ernest Torrence as William Canfield Jr. and Sr. Also, the boat in Steamboat Willie is a stern-wheeler transporting life-stock, whereas the song is about a boat race, so that would also reference the film rather than the song.

●      You can listen to the song “Steamboat Bill” here: https://www.youtube.com/watch?v=Sg7vPzUK91I the song also has a connection to another classic American folk song: “Casey Jones” which was sung by Buster Keaton in the 1965 documentary “Buster Keaton Rides Again” a 1919 release of the song even featured Casey Jones and Steamboat Bill as the A and B side of the same record.