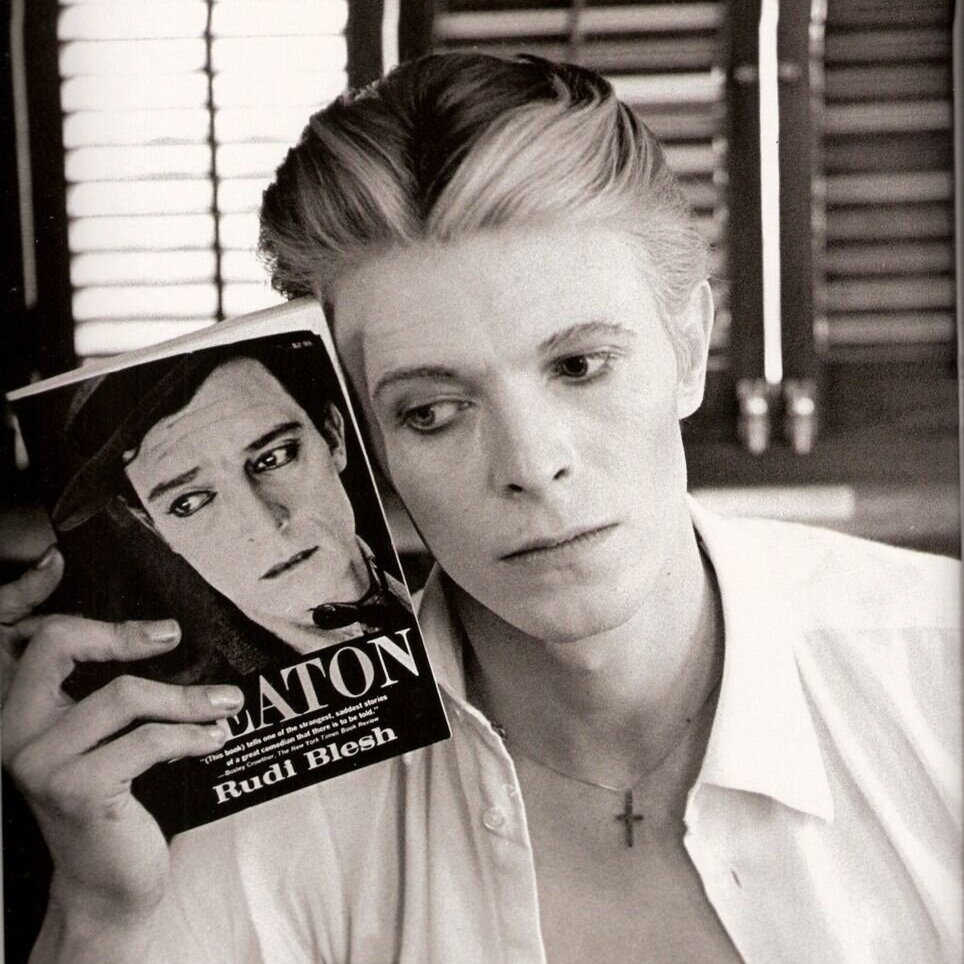 David Bowie was always an innovator and a chameleon when it came to his music and looks. After he killed off the androgynous glam persona Ziggy Stardust with which he had tremendous successes in the first half of the ’70s he started experimenting with a new type of music he called “Plastic Soul” and let himself be influenced by electronic music and later Krautrock. In this period he created a new alter ego: The Thin White Duke, which originated during the filming of the movie “The Man Who Fell To Earth” While working on the film the renowned photographer Steve Schapiro teamed up with David Bowie and visited him on the set in 1975 to work the artwork of his albums “Low” and “Station to Station”.

Schapiro had previously worked with Buster Keaton during the recording of “Film” and David Bowie had always been a great admirer of Keaton, who he has stated being one of his -ahem- “Heroes”. An idea arose: Bowie let himself be photographed while holding and reading the biography “Keaton” by Rudy Blesh.  In the most famous picture of the series Bowie poses his face just like Keaton on the book cover, which he holds next to his face. The two look very similar as Bowie is perfectly mirroring Keaton. The use of the prop in the photographs was not anticipated by Bowie, who had known Schapiro had worked with Keaton. Bowie and Schapiro had a very trusting professional relationship and worked out a lot of ideas on the spot. Bowie loved Buster Keaton and he is believed to just have the book in his dressing room, so the idea came to them spontaneously.

As for the similarities between the two, it seems most fitting to quote Schapiro himself on this:

“I photographed Buster Keaton in 1964, so he was an older man at that point. (…) The comedian was a favorite of Bowie’s. When I had my first conversation with David on the set, when I happened to mention that I’d shot Keaton he became very excited, because Keaton was one of his heroes,” “I think there’s a degree of similarity between them. With Bowie, there’s this progression and he created a persona and developed it, and felt that he’d done it, so moved onto something else… Keaton engineered all the stunts he did, the house falling down around him and others – he worked on them himself. They were both brilliant at finding new things and being able to do them in a brilliant way.” They were alike in their visionary genius.”

●      David Bowie would continue to express his love and admiration for Buster Keaton, also briefly appearing as Buster in his music video for “Miracle Goodnight” in 1993. https://www.youtube.com/watch?v=Veg0U9bju1k

Some footage of Bowie recording the Buster-part of the video can also be found here:      https://www.youtube.com/watch?v=cPkCCAl8wQM, where he can also be seen with a kitten on his head, a reference to a famous production still of Buster in “the Electric House”

The photo was published in the book “Bowie by Steve Shapiro”. Some of the quotes from Shapiro come from this interview about the book: https://www.anothermag.com/art-photography/8840/david-bowie-and-buster-keaton-by-steve-schapiro