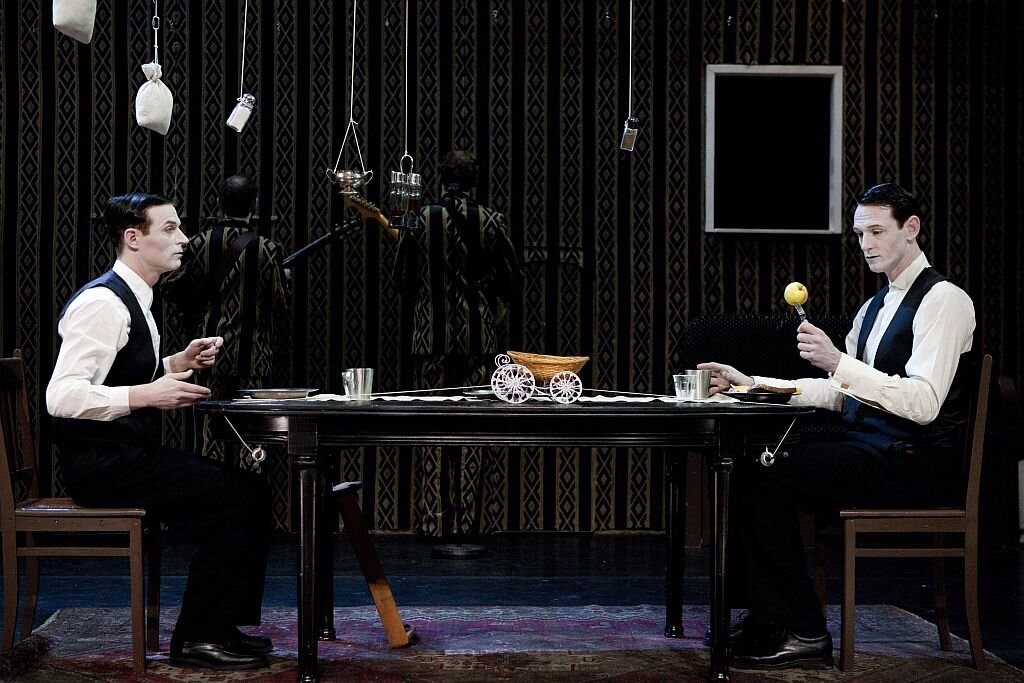 Jakob Ahlbom is a Swedish performer who moved to the Netherlands in the early 90’s to study Mime at the Amsterdam School of the Arts. He has been making plays and choreographies with his own company since the early 2000’s. The Jakop Ahlbom Company is based in Amsterdam and they want to create a magical universe that combines mime, slapstick, dance, music, illusionism and special effects. The works often revolve around people’s often strained relationship with themselves and the world around them and the characters deal with a world that is not always what it appears to be. Characters become lost in magical worlds that are far more powerful than them and confront them, harshly, with their own impotence. Love is the only handhold as they struggle for survival. Yearning for it gives a powerful poeticism and melancholy. It offers solace and hope; despite the often traumatic events the characters must endure, there is often an optimistic tone. They do not engage with confrontation without good reason, because they find a fantastical world that offers room to breathe and an escape from the harsh realities of existence.

Ahlbom’s work always combines tragedy with humor and it’s unsurprising that Buster Keaton is one of his greatest inspirations. Ahlbom finds humor in utter impotence, the attempts to get a grip on life and, despite failure, the refusal to give up. This results in physical slapstick being a thread running throughout his oeuvre. The human willingness to be pure, in all its beauty and simplicity, moves the audience and makes them smile. In 2012 the mime play “Lebensraum” (German for “living space” or “habitat”) premiered, which is a fantastical display of Ahlbom’s utter admiration for Buster Keaton:

Two men are living together in a single tiny room. They have ingeniously solved the problem of lack of space. All the furniture has multiple functions: the bed doubles as a piano and the bookcase serves as a fridge. And to compensate for the absence of a woman, the pair create a mechanical cleaning lady. But it soon becomes clear that she has no intention of quietly going about her chores. This doll has opinions of her own. Tensions mount, and the room starts getting smaller and smaller. The men’s latest invention may be their downfall.

Because in silent movies where accompanied live, the piece is accompanied by Ralph Mulder and Leonard Lucieer of the band “Alamo Race Track”. The play has had numerous runs and toured the world. Recently the Jakop Ahlbom Company did a fundraiser on the Dutch Kickstarter-like website Voordekunst. They did this to raise money to record the play on camera and to release it as a film. The fundraiser was successful and the film is to be released in the spring of 2020.

The two men are dressed like Buster Keaton and wear white face- makeup similar to Keaton’s in his earlier films. The whole set set is a living room, similar to the tiny house in “The Scarecrow”. During the performers execute numerous of Keaton’s most famous gags. This are some of the highlights:

●      The play starts with the two men performing the whole breakfast table scene Buster Keaton performed with Joe Roberts in “The Scarecrow”. The entire scene is meant to echo the original exactly, complete with the tiny train carrying food back and forth and the numerous items being suspended in mid-air with levers. The whole scene is incredibly well-coordinated and fantastic to see live on stage.

●      The mechanical cleaning lady refuses to do what the men want, resulting in one of them performing a version of the putting-the-wife-to-bed scene from “Spite Marriage”.

●      Apart from being a homage to Buster Keaton in its entirety, Buster himself is also physically present onstage. The right wall of the living room is graced with a portrait of Buster, guarding the actors with a watchful eye. In one particularly energetic scene one of the men jumps through the painting, echoing Buster in “The High Sign”.

●      The play also contains a gag originated by Joe Keaton which Buster started performing later in his career. One of the men stiffly puts his leg on the table, then the other, seemingly suspended in mid-air before falling off the table while holding the pose.

●      Another highlight is a gag seen in “Sherlock Jr”. One actor holds a tray standing against the back wall, the other jumps through the tray and seemingly through the other man and the wall as well. Keaton has explained how this astonishing gag, which also originated in Vaudeville, was put together. Ahlbom must have paid close attention to this explanation, because it is executed onstage perfectly.

More information about “Lebensraum” can be found here : https://jakopahlbom.nl/performances/lebensraum/?lang=en