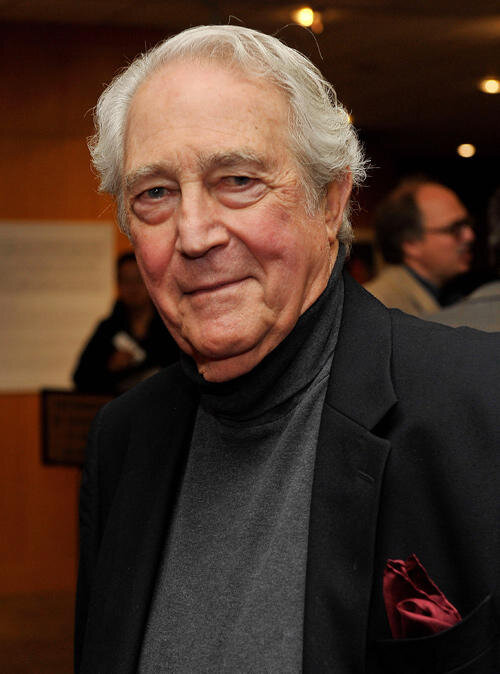 Actor James Karen, one of Buster and Eleanor Keaton’s dearest friends, died at his home in Los Angeles on Tuesday, Oct. 23. He was 94 years old.

Keaton Society President Eryn Merwart has written: “The International Buster Keaton Society was privileged to have James Karen’s support over many years. We are so grateful for the time and energy he spent working with us. We send our sincere condolences to Alba and to all of those whose life he touched. His love and passion for Buster was enormous, and we will endeavor to honor Mr. Karen by continuing to share laughter, and by connecting people through the joy of Buster’s work.”

Jim Karen’s wildly prolific career spanned more than 200 films and television shows as well as stage appearances. He made his Broadway debut in 1947 in A Streetcar Named Desire. In addition to numerous stage performances, he had credits on 127 television shows, most memorably as the villain who blew up Walnut Grove in the finale to Little House on the Prairie, as well as roles in 73 feature films, including The China Syndrome, Wall Street, Poltergeist, All the President’s Men and Return of the Living Dead.

His final credits were for two documentaries about Buster Keaton, the award-winning Peter Bogdanovich film The Great Buster: A Celebration and the upcoming Buster Keaton: Home.

James Karen was born Jacob Karnofsky in Wilkes-Barre, Pennsylvania, on Nov. 28, 1923. One of his earliest recollections was taking his Russian immigrant father to see silent movies, where Karen would read the titles for him.

According to the obituary in The Hollywood Reporter, “Karen met Keaton in 1956, and the following year they performed in a touring production of George S. Kaufman and Marc Connelly’s comic play Merton of the Movies. They paired again for Film (1965), a 20-minute, virtually silent picture written by Nobel Prize-winning playwright Samuel Beckett (Waiting for Godot).”

Upon hearing the news, former Keaton Society vice president Dr. Tracey Goessel, a good friend of the Karens, was reminded that when Buster’s widow, Eleanor Keaton, was going through chemotherapy in 1998, Jim Karen often took her to chemo sessions and to buy groceries. “Many offered to help; Jim actually stepped up to the plate,” she said.

One of Karen’s final public appearances was at a Keaton Society event held at the Hollywood Heritage Society to celebrate the installation the following day of a plaque honoring his mentor, Buster Keaton, in June of this year.

In a 2013 interview with the Wilkes-Barre publication Citizens Voice, he said of acting, “It was terrific for me. It gave me a real reason to exist, and to live. I was doing exactly what I wanted to do.”

For more information about his life and career as printed in the Hollywood Reporter click HERE.

And for more from The Citizen’s Voice, click HERE.