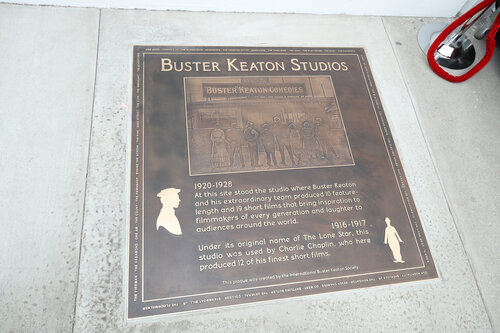 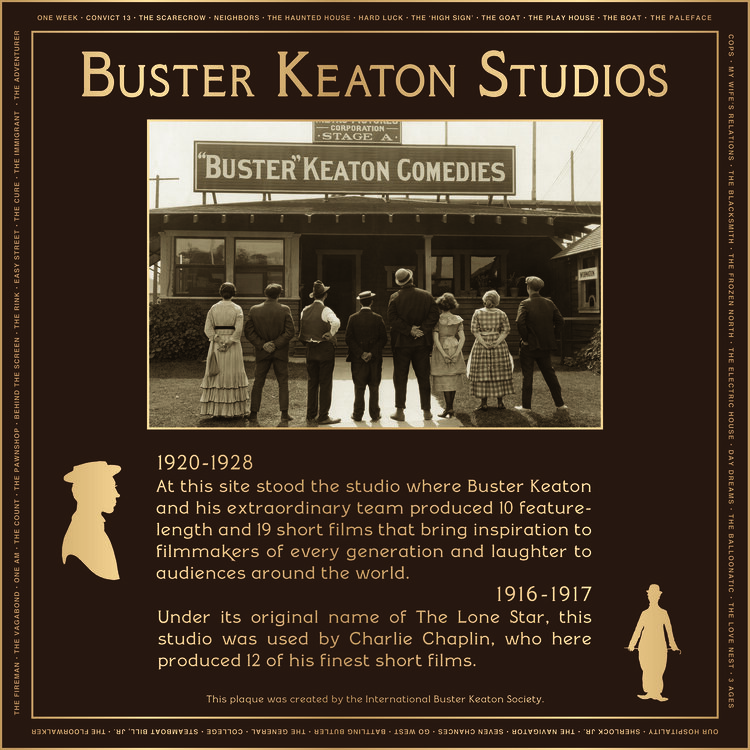 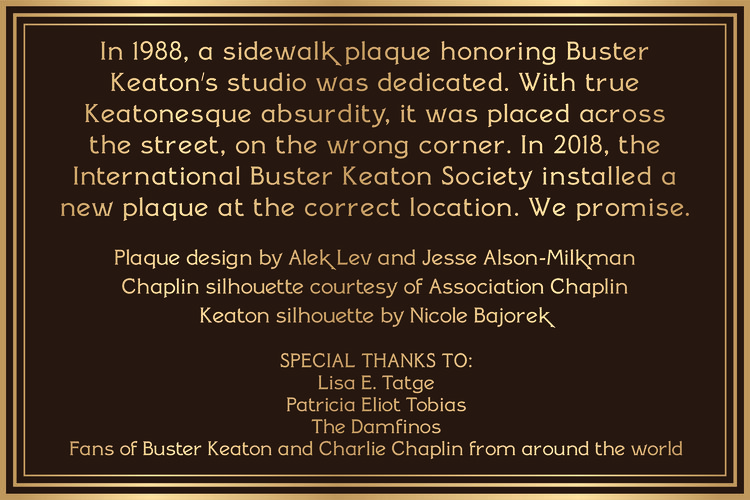 The new Buster Keaton Studios plaque was made possible through the support of:

The International Buster Keaton Society, Inc.
Lisa Tatge
Over 200 donors to our online fundraising campaign from around the world
Audience members from our 2017 screening of The General at the Frauenthal Theater in Muskegon, Michigan

Special thanks to the Board and Officers of the Damfinos: 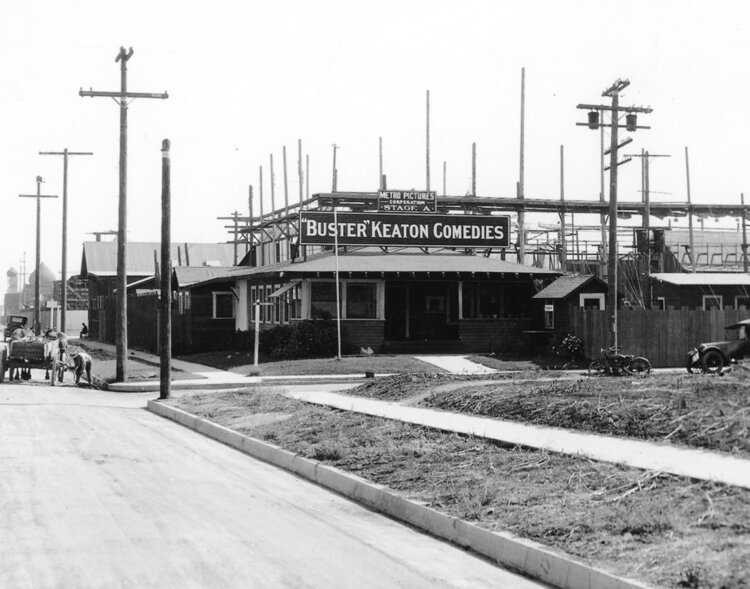 The Story of the Plaque(s)

Buster Keaton’s greatest cinematic work is comprised of 29 films, and Buster used his production studio at the intersection of Lillian Way and Eleanor Ave in Los Angeles as his home base for all of them. And there must be something in the soil there, because prior to Buster’s years there, Charlie Chaplin used the studio to produce 12 of his greatest short films.

This is Hollywood hallowed ground.

In 1988, a plaque was placed at the location of the former studio marking the spot. However, it had a few problems. Firstly, the materials that comprise the plaque have not held up well against decades of foot traffic. It’s become difficult to read the plaque at all. Second, it made no mention of Charlie Chaplin. While there is often a “Charlie vs. Buster” competition online, Patricia Eliot Tobias speaks for us all at the society when she says, “Buster and Charlie were friends, and the world needs as much laughter as it can get.” So, this new plaque corrects this oversight, and properly honors Chaplin’s work. 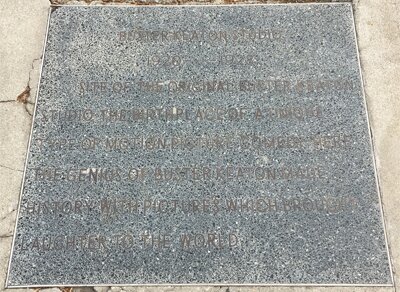 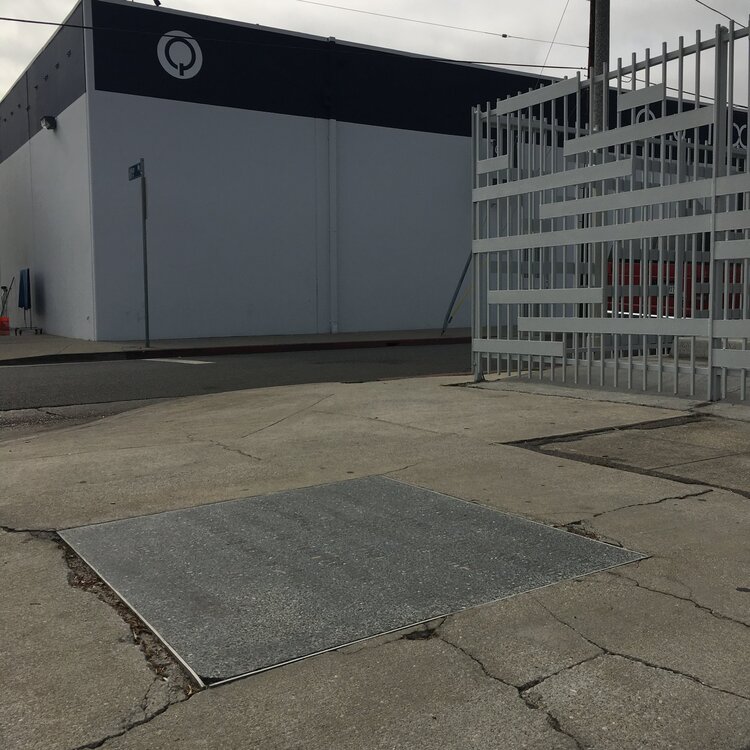 Patty Tobias first asked me to help create a new Buster Keaton Studios plaque in November, 2014. Here we are in June, 2018, finally placing that plaque in the ground. Time elapsed? 43 months. For a little perspective, over the course of 47 months, Buster Keaton released Three Ages, Our Hospitality, Sherlock Jr., The Navigator, Seven Chances, Go West, Battling Butler, The General and College. In our defense, this plaque is heavy. The project began with a cold call to the Los Angeles City Council. I was eventually connected with Daniel Halden, Hollywood Field Deputy in the office of Council-member Mitch O’Farrell (13th District). With extraordinary patience, Dan has helped us through this entire process, beginning with connecting me to Craig Shaw and the great people at the Bureau of Street Services. It’s their job to assess the project’s feasibility, develop a cost estimate, and then, finally, put this heavy thing into the ground. At some point, then, we needed a plaque. I worked with Jesse Alson-Milkman on the overall design, with additional layout help from Keaton expert David Pearson, graphic designer Amber Zion, and filmmaker Jeff Vespa. The photo of Keaton and his team in front of the studio was generously donated to us by Marc Wannamaker. However, the Damfinos discovered another version in their own archives, and that copy was used. The Keaton silhouette was created by artist Nicole Bajorek, and the Chaplin silhouette was graciously provided by Associate Chaplin. David Pearson also made sure that the names of the Keaton and Chaplin films that ring the plaque were historically accurate. Finally, Masterwork Plaques was selected to produce the final product. Hiring a crew to dig up a sidewalk, pour new concrete and mount a massive bronze plaque is expensive. So is a massive bronze plaque. We launched an online fundraising campaign to see if the international community of Buster Keaton fans would support this initiative. After 30 days, more than 250 individual donors, and just over $18,000 in donations, we had our answer. We want to express, once again, our deepest gratitude to all our donors, with a special mention of Lisa Tatge, our most generous - and first - contributor. With a final contribution from the Damfinos’ treasury (for which, in turn, we give thanks to our members and merchandise customers), our plaque dreams have become a reality. A final debt of gratitude goes to Society founder Patricia Eliot Tobias and current president Bob Borgen, along with the board of directors, the officers, and the dedicated volunteers whose creativity, time, and commitment helped to realize this dream. 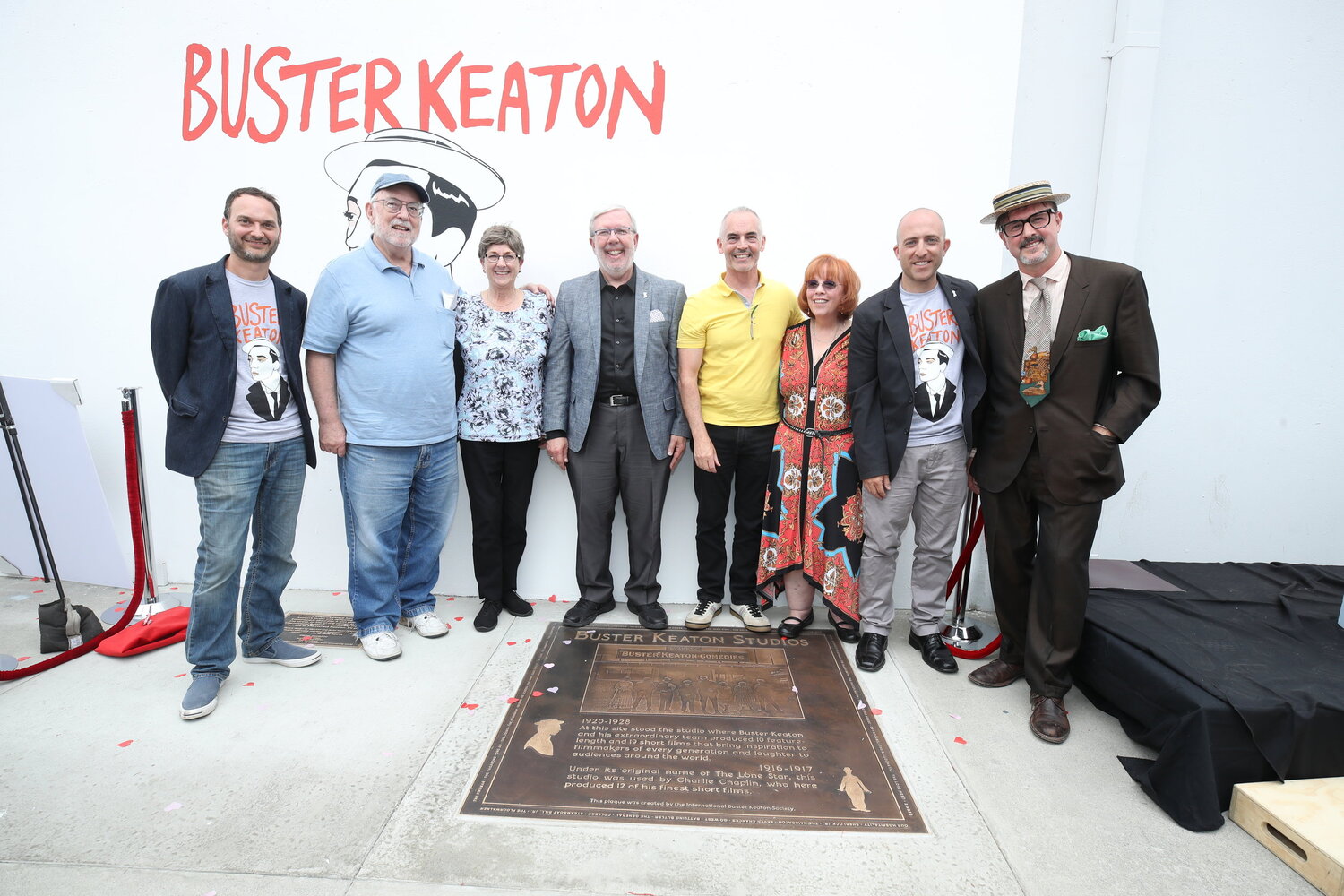